The store will not work correctly in the case when cookies are disabled.

From humble beginnings in 1895, Barnes & Mullins now find themselves at the forefront of Musical Instrument distribution within the UK, Europe and across the world. With close to a thousand customers in the UK and Ireland and hundreds more located across the globe, Barnes & Mullins are proud to distribute some of the world's best musical instruments and accessories. Although originally based in London, B&M are now located in Oswestry close to the Welsh border in beautiful, rural Shropshire. From their 40,000sqft warehousing and office facility, hundreds of parcels and pallets are despatched daily to music stores, wholesalers and distributors.

Throughout the company's history and the historical ups and downs of global events, one thing has stayed constant: the debt that we all owe to the founders, Messrs S 'Bowley' Barnes and Albert Mullins.

In 2014 an article was commissioned in MIPro, the music industry trade magazine. Below, you can learn more about the story of B&M's founders. A pair without whom the musical world would be much poorer. 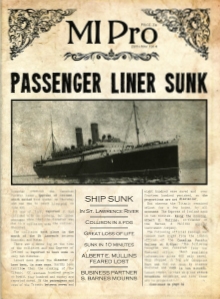 This article has been reproduced from an article originally published in MIPro Magazine, written in collaboration with Ronnie Dungan, 2014.
(Images supplied by Barnes & Mullins Ltd).

Little-remembered, owing to the more terrible events that proceeded it, the sinking of the Empress of Ireland, exactly 100 years ago this month, with the loss of more than 1,000 Lives, remains Canada's greatest peacetime nautical disaster and, for one UK music distribution company, a pivotal moment in its Long history...

Some 1,477 people were aboard when the ship weighed anchor, including a crew of,420. The weather was clear, and Kendall, already well­ known to many for his part in the capture of the infamous murderer, Doctor Crippen, on his previous ship The Montrose in 1910, was looking ahead to a six-day journey across the Atlantic to Liverpool.

A few hundred kilometres East of Quebec, the Storstad, a Norwegian coal-ship filled to capacity with 10,400 tons of coal, was heading West to Montreal. Built in Newcastle-upon-Tyne, it was 135 metres (445') long and 17.5 metres (58') wide drawing 7.5 metres (25') of water. It was built with longitudinal beams (stem to stern) with a sharp bow, reinforced for ice navigation.

At about 21:30, the ship's captain, Thomas Andersen, retired to his cabin, leaving First Mate Alfred Toftenes in charge with orders to wake him six miles from Pointe-au­Pere or in case of fog.

Back on the Empress, some hours later at 01:38, as it neared Pointe­au-Pere, near the town of Rimouski, Captain Kendall was on the bridge when the lookout shouted: "Object on the right!" Through the darkness the Captain could clearly make out the lights of another steamer, about six miles away. It was the Storstad. To Captain Kendall it seemed the two vessels would safely pass each other, starboard to starboard.

However, a bank of fog suddenly rolled out from the shore and quickly enveloped the two ships, reducing visibility to zero. Captain Kendall ordered "Full Astern" followed by "Stop". The Empress was soon dead in the water.

A prolonged blast from the other ship's whistle could be heard off the starboard bow. Empress replied with three short blasts. There was another long blast from the whistle of the unknown vessel, still on Empress ' starboard side, but this time closer.

Captain Kendall ordered two more long blasts. A moment or two later, there was another long blast from the mystery vessel, still off the starboard bow, but closer. Again, Empress sounded two long blasts. The time was 01:55.

Seconds later, Storstad's masthead light and her two side lights appeared suddenly out of the fog, her bow aimed directly at the Empress, between its two funnels. Captain Kendall, standing on the starboard bridge wing, hailed Storstad by megaphone, directing her to go full astern.


While Storstad gave three short blasts, in the hope of avoiding or minimising a collision, Captain Kendall ordered the Empress full ahead, and her helm hard aport, hoping for a glancing blow.

But while the third whistle was still in the air, the Empress was struck by the Storstad at a 45 degree angle with the bridge at the centre of the ship.

Kendall yelled not to reverse engines; to keep the boat stable, and use the Storstad as a kind of plug, but the coal-ship reversed engines and water quickly began to pour into the Empress.

Knowing his ship was doomed, Kendall ordered all watertight hatches and doors secured, and to man all lifeboats. With its strong starboard list and force of the impact, it was impossible to close most of the watertight doors. The wireless operator sent an SOS.

Many passengers were awoken by the list and penetration of water in their cabins. Having spent less than ten hours on the ship, most passengers blindly found their way to the lifeboat stations. Some of the steel lifeboats broke loose and crushed passengers at their starboard stations. Throughout this a few boats were put in the water.

Ten minutes after impact, the ship completely turned over to starboard, the two huge yellow and black stacks hit the water and crushed one of the lifeboats. Many passengers were thrown into the water including Captain Kendall who swam to a folding boat. During the next ten minutes, the ship slid underwater forming two huge waves. Only 14 minutes had passed since the collision. Then it was gone.

Of the 1,477 passengers and crew that embarked in Quebec, 1,012 lost their lives. The 465 survivors were subsequently cared for in nearby Rimouski.

"Of the 1,477 passengers and crew that embarked in Quebec, 1,012 lost their lives. Among those lost was Albert Mullins."

Among those passengers lost was a musician, Albert Mullins, one half of a banjo duo with Samuel 'Bowley' Barnes who, in 1895, had together established a musical instrument company in Rathbone Place, London - Barnes & Mullins.

Barnes & Mullins quickly grew into a successful and profitable company, with Mullins taking on the role of head of sales. In late 1912 Albert, along with his wife, Kate, and daughter Eileen, set off on around the world sales trip, arriving in Perth, Australia on the 31st December 1912. Their son Dick remained at home, continuing with his schooling .

The Mullins were in Sydney by early January and toured Australia for over a year before leaving for Vancouver, where they arrived on 5th March 1914.

Albert's work kept him in Canada for nearly three months before it was time to eventually return to England. There is no doubt that his international sales drive was a success. Evidence of that remains today in the number of enquiries the company still receives from

Australia and Canada regarding the heritage and value of vintage Barnes & Mullins banjos or mandolins.

Of course, the trip ended in tragedy and Albert and his daughter Eileen both lost their lives on the Empress of Ireland.

Kate Mullins survived, although she is understood to have sustained two broken legs. On the 12th June her sister Helen arrived in Quebec with Kate's son Dick to take her home.


The disaster affected both the Mullins and Barnes families deeply. Albert and Samuel had been the greatest of friends, as well as business partners, and this was demonstrated by Albert Mullins giving his son Dick the middle name of Bowley.

Kate Mullins never remarried but did live to the age of 89, passing away in 1964.

Despite a death toll nearly as high as the Titanic two years earlier, and with the outbreak of the First world War two months later, the Empress of Ireland disaster quick faded from memory.

Kendall and Andersen served in the war, and both were torpedoed. They survived. But not the Storstad. It was torpedoed on 8th March, 1917 and sank near the coast of Ireland. All hands were saved, however.

Kendall never return to sea after the war, and died in England in 1965 at the age of 91. Strangely, his obituary in The Times made no mention of the sinking of the Empress of Ireland.

On 30th April, 1998, the remains of the Empress were declared a historic site by the Quebec provincial government. The shipwreck become the first underwater heritage site in Quebec, and also benefits from protection under Canada’s merchant marine legislation.